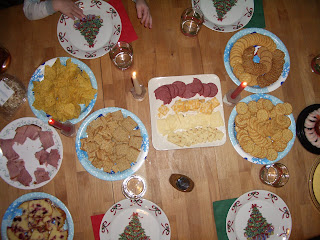 Every Christmas Eve it is our tradition to have a bunch of crackers, various cheeses and cheeseballs, crazy deli meats that we wouldn't buy any other time of year, and whatever treats we happen to have still around. Or maybe I make some treats just so we have some around. We just generally pig out. (Long time ago we also had cheese soup, but that just became just one more thing to cook, and I am tired of cooking by that point.)
So, I am watching/listening Good Things Utah (kind of embarrassed to admit that; I don't know why) and they are talking about some the show watcher's Christmas traditions. Well, someone wrote about their tradition (which consists of all of the SAME things as ours), but they gave it a name. Which had never occurred to me. They call it the "Christmas Eve Pig Fest".
We now have a name for one of our Christmas Eve traditions. It is now officially "The Annual Family Buckner Christmas Eve Pig Out Fest". The goal or point is to eat nothing that is healthy for you. (I changed up the name to make it more personal.)
Here's hoping that this year is the best "The Annual Family Buckner Christmas Eve Pig Fest" ever.
Posted by The Buckner Fam at 7:41 AM 3 comments: 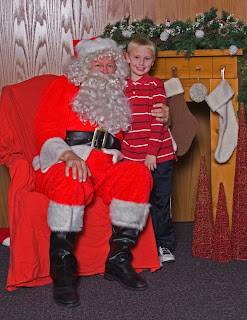 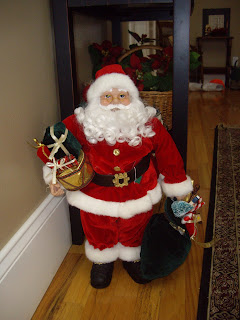 Last night was the Christmas Ward Party.  The one party that you don't have to actually drag me to. Because for the last however many years I've had a child or children who would want to go, and for one reason. Not for the food or entertainment, or even the decorations for that matter, but for YOU KNOW WHO.  The big man in the red suit. You know who I'm talking about.
SANTA CLAUS.
So after the dinner, the dessert, 2 DVD's, primary children singing and YM/YW singing, it is FINALLY the time to line up to see Santa. Now, it seems to be an inherited trait within our family that we'd rather have our eyeballs poked out than to sit on Santa's lap. I've always wondered about those children (even when I was a child) who were actually comfortable sitting on a stranger's lap, even if it is Santa. But I digress.
Wes was pretty excited about it at first, but the fear was starting to get the best of him. But I know Wes, and he WOULD regret it if he gave up because of his fear. So I grabbed his hand and we got back in that Santa line and even though he was the second to last child in line, and was getting more nervous by the second, he persevered. He made a vow to not sit on Santa's lap, he was only in it for the candy cane. I told him he should at least say hi to Santa, and as he did so, that wonderful Santa took Wes by the hand, had Wes stand next to him, put his arm around Wes and had their picture taken. What a sweet Santa...the best I've ever seen. We were able to get the candy cane Wes was after the whole time and Wes was feeling pretty good about himself.  As we walked away I congratulated Wes for being so brave and Wes said to me,"You don't say no to Santa." And he's right. Cause you ain't gettin' no candy cane if you are not polite to Santa!
Posted by The Buckner Fam at 8:17 PM No comments:

What not to do. 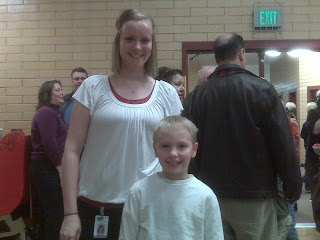 Wes had his 2nd grade Christmas Program on Tuesday night. Well, it's not just his program, but to us (his family) it basically is HIS program. He, along with all of the other 2nd graders, had been practicing and working on this for quite a few weeks. I was somewhat taken aback when he brought home his assignment...he was to be an angel. Now, for some reason when I think angel I think girl. But when you get right down to it, are angels really "girly"? I don't think that it says one way or another whether an angel is a girl or a boy in the scriptures. Well, all of this could be for another post. Back to me thinking that he was going be playing a girly angel. Fortunately through some connections I was able to put together a costume rather easily.  A white sheet with a hole cut out for his head to go through, and some glittery gold cord for a tie. It was neither girly nor boyly.  In fact I think it was just right. Okay, costume ready to go. And since Wes can memorize lines super quickly there wasn't any worry about that. So what do I have left to do? Apparently nothing. Or so I thought.
Fast forward to Tuesday night. A nice freezing cold winter night. Everyone is set and ready to go. The whole family is actually going to be there, making this even more of an event. I'm the mom, I'm thrilled that we are all there together. And then it hits me and my stomach plummets to the floor; the camera battery is DEAD. But wait, we have the new little video camera. Thank goodness for that.  BUT NO, it is dead too. I can't even say how sad this makes me; and how I don't want to act like it is a big deal.  Especially for Wes' sake.
He was so very cute; played his so part so very well. I could not take my eyes off of him, my heart was bursting with glee to see him there being so happy himself.  And I am ignoring that mean little voice reminding me about the camera issue the whole time.
So, here is our one picture of him. AFTER he had taken his costume off. He's here with his teacher, Miss Meldrum. And he is still looks like an awesome angel.
p.s. This picture was taken by Kevin, with his blackberry. Which is when I found out that he could take pictures with the blackberry. sigh.
Posted by The Buckner Fam at 9:52 PM No comments: 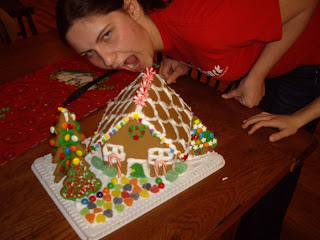 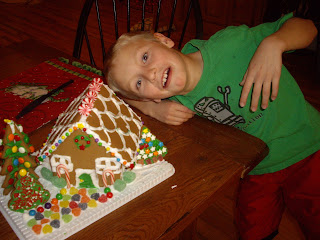 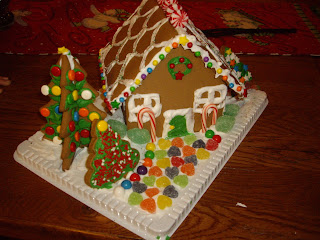 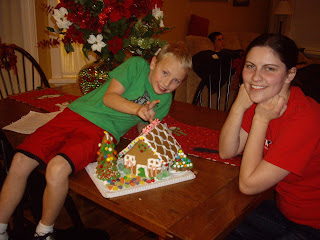 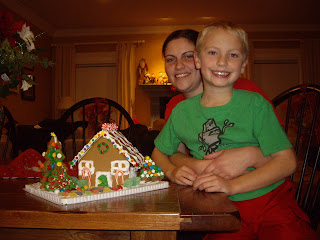 Kristen came home for break and the first thing I ask her do is help Wes with the Gingerbread House. She is so patient and nice she gladly went along with it. Yeah, I know, it is just the Costco kind, but hey for $10 who can beat it? If I tried to make the house from scratch I definitely would not be feeling the Christmas Spirit by the time I finished. And it IS cute.
Posted by The Buckner Fam at 10:32 PM 1 comment: 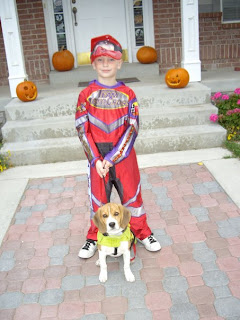 This is our family blog. Apparently we post stuff on here about our lives, we are indeed models.
Posted by The Buckner Fam at 7:01 PM No comments:

The Buckner Fam
We are the Buckner Family and this is our blog. We are a bit dysfunctional, but we love each other and try to remember that. 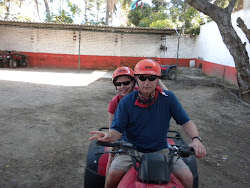 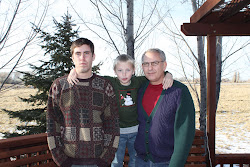 anyone want a dog? 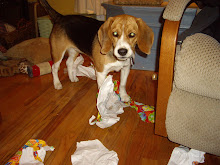 we are the family buckner